The base of the prize is a Euclidean object, a cuboid. The prize itself is attached to this base in a movable, flexible way. The formal shape of the prize was inspired by a model of the famous Fano plane, which is the smallest finite projective plane. It is thus connected to finite geometry, András Gács’s main research interest. This is a beautiful form of depiction in and of itself: the seven points of the Fano plane are represented as the midpoints of the six edges and the centroid of a tetrahedron, while the seven lines are represented by the four incircles of the triangular faces and by the three segments connecting the midpoints of opposite edges. It can be used to explain mathematics, or simply to delight in the simplicity of its structure. Following consultations with the founders of the András Gács Prize, the prize was produced by Koino Design Studio, a collaboration by young artists. 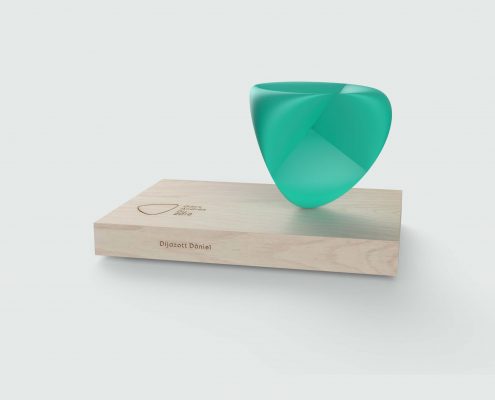